- The promotion animation can be inspected from the following. 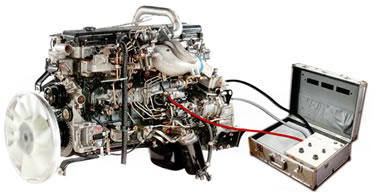 Up until now,it has been difficult to perform individual starting tests for recycling of used computerized dieselengines that did not stare because the computer had been damaged in an accident or for some other reason.

Σe-Star can be used widely.

Σe-Star will be useful to used engine distributors and automobile mechanics,among others.

*1)Specifications and appearance are subject to change without notice.
*2)It is not intended to guarantee the starting of all computerized diesel engines.
*3)The input power source and starter power souece are responsibility of the purchaser.

Member of Enterprise certified by the Japanese Ministry of Economy,Trade and Industry